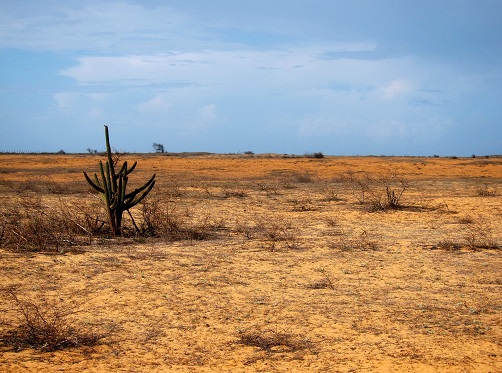 Mid-January and mid-afternoon in Cocorobó. Nothing stirs in the blazing heat. Nothing that is until, as if by magic, a small whirlwind rises from the dusty roadbed. It swirls up the street banging doors and scattering litter, until gaining strength and height, it roars off into the parched backlands, its passage marked by a rising column of brown dust. A dog, its colour matching the dun mud walls of the shacks and its ribs their corrugated iron roofs, noses in the fly-blown garbage spilled from an upturned oil drum. It roots out a bleached bone and holding it down with front paws, tries and fails to crack it in blistered jaws. A distant hum and the dog lifts its head and sniffs the oven-dry air. Abandoning its bone and with scabby tail curled between its legs, it sidles out to the middle of the street and stands there stock still, facing out of the village, muzzle raised and waiting.

The hum grows then mutates into a stuttering roar that seems to both combine with, and increase the heat of the afternoon. A once white pickup truck clatters down the street and stops in a cloud of dust beside the dog. The doors of the cab swing open and two men get out. They stand looking at the village. The dog crouches looking from one to the other.

At the sound of its name, the dog squirms in the dust contriving to wag its backside while keeping its tail tucked tight beneath its belly.

The two men lean against the truck scanning the pathetic string of shacks that comprise the village. The taller and leaner of the two takes off a grubby baseball cap and wipes it across his forehead then behind his neck. His lank hair is dirty blonde and there is a shifty almost fearful look in his pale eyes. The short fat man is hatless and his black hair is full of dust. He is dressed in a khaki shirt and khaki trousers held up by a leather belt. A stubby revolver is tucked in the belt just where it sags beneath his belly. The dark semi-circular patches beneath each armpit have not yet reached the salt tidemark left by previous sweat.

‘And the guide?’ the tall man says.  He sniffs. ‘Jesus, is that you or the fucken’ dog?’ He swings a booted foot at the dog which rolls onto its back pawing the air.

The fat man takes out his gun, holds it above his head and fires. The detonation is stupendous, splitting the dense silence of the afternoon. A raven rises from the garbage with a squawk, flaps clumsily into the air and heads off into the bush.

The tall man sticks a finger in his ear and waggles it about. ‘Bastard. Do you have to do that?’

The fat man looks up at him unsmiling. The whites of his eyes are blood-veined and yellow. A figure detaches itself from the shadow of a doorway and walks towards them. He wears a greasy leather jerkin and scuffed leather chaps on bandy legs and sandals made of car tyre. A rifle trails from his left hand. He stops in front of them, removes his hat and addresses himself to the fat man. ‘Coronel, boa tarde.’ His voice is soft.

‘Boa tarde, Joselito. This is the guide.’

Joselito looks at the fat man enquiringly who raises his eyebrows and gives an almost imperceptible shake of the head. ‘Vámonos?’ Joselito says and replaces his hat.

‘Fio, venga, suba.’ Joselito bangs the side of the truck. And the dog takes a running leap at the truck, clambers in, its claws scrabbling on the scarred and scratched paintwork. The three men climb into the front, Joselito squeezed in the middle, the ancient rifle between his knees, the fat man at the wheel and the gringo with his head half out the window. The starter motor whines, stops, whines again then catches. The engine coughs into life and the truck leaves the village in a cloud of dust and exhaust fumes. The dog stands in the back, ears flattened against its mangy head by the blistering air. A brown woman, feet and legs bare beneath a filthy shift that might have once been red, watches them go from a doorway then turns back into the dark interior of the hut. Silence and heat envelop the village once again and nothing stirs save the settling dust.